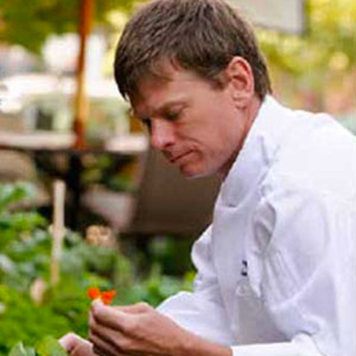 Chris Keating has showcased his superb culinary talents and creativity since 1993.

A longtime Aspen resident, Keating understands and appreciates the Colorado culture, and he is passionate that his culinary creations mimic the style, class and distinction that are associated with American Alpine Cuisine. “Chris epitomizes culinary precision. He intellectually explores every aspect of an ingredient, and as a result he is able to create new, innovative methods for favorite dishes,” said James Beard Award Recipient, George Mahaffey. “Above all, Chris has a remarkable sense of taste and his creations are pure pleasure for the senses.”

Chris’s passion for cooking emerged from his love of art. Keating is an accomplished painter, most recently focusing on oil; but has worked with all mediums. Growing up on the East Coast, Keating spent most of his  teenage years working in restaurants. Until his early twenties, there had always been a separation between work and his passion for the arts. While attending the University of Colorado, he came to the realization that he could  merge the two and pursue a career in the culinary arts. After some time working for Cuisine Management in Naples, Fla. Keating decided to further his culinary experience at the prestigious Culinary Institute of America  in Hyde Park, New York. While completing his AOS degree in culinary arts, Keating did an externship at L’Auberge Sedona. During his time in Sedona, Keating had the chance to meet renowned Chef Gray Kuntz and  jumped on the opportunity to estage under his eye at the famed New York City restaurant, Lespinasse. After graduation Keating had the option to continue working with Kuntz, but instead decided to continue his career in  the beauty of the Rocky Mountains.

Keating spent 5-years working at the Little Nell where he was part of the culinary team that brought the restaurant it’s fifth Mobil star. Keating’s culinary experience also includes launching celebrated Ruthie’s restaurant as the Executive Chef and Sous Chef at the Pine Creek Cookhouse. Throughout his career he has received rave reviews, and fame food writer John Marianid escribes him as having “what so many chefs (ironically) lack – an exquisite sense of taste.” Keating worked at the Jerome from 2006–2009 delivering a kitchen philosophy is in sync with his own culinary style as Culinary Director before returning to the famed Pine Creek Cookhouse.

Keating has a very clean style of cooking, and prefers to use fresh, wholesome foods that originate as close to the restaurant as possible. He uses classical techniques to experiment with new trends, always resulting in well-balanced dishes.

Since 1993, Keating remains devoted to the rocky mountain life and continues to take advantage of all that it offers. A competitive cyclist, ski mountaineer and painter, he remains very active in and out of the kitchen. He  lives in Aspen with his wife, and son Matthew.